So, while I was spending five years in graduate school, getting some math larnin' so I could eventually score standardized exams for peanuts, I wasn't always studying. I spent a lot of time working on this: 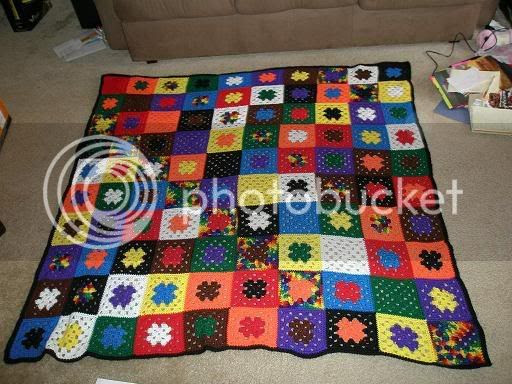 It's a self-orthogonal latin square of order ten, which sounds complicated, but isn't really. You've done Sudoku? It's like that, except without the smaller 3x3 parts. Each column and row have each color exactly once in the outside and inside parts of the granny square. Every possible coupling of outside and inside colors is there, and if you flip the thing along the upper-left to lower-right diagonal, the inside and outside colors match. See the upper right corner? It's blue on the inside and black on the outside. The opposite corner is the reverse. This is a pretty nifty mathematical construct that for the longest time was conjectured not to exist. (Seriously, if you asked Euler, it totally would never happen.)

I took it to seminar and everyone thought it was cool.

Crafting-wise, it's pretty easy. The hard part is that every square is different. Other than that, it's 100 granny squares in ten colors, done in Red Heart acrylic. They're whipstitched together and there's a border row of single crochet around. Actually, the hard part was assembling in the right order. I looked this particular square up in a journal, so it wasn't like it was a puzzle or anything, but it was still annoying.

It lives on the back of our couch now, when it's not needed for its bright happy warmth.
Posted by janet at 8:24 PM

This is so incredibly cool!